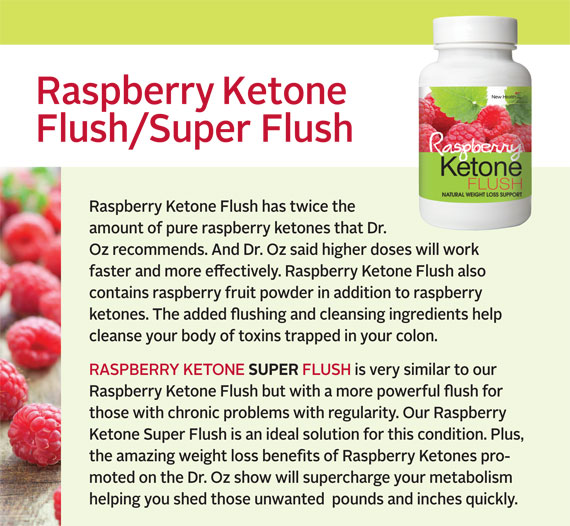 Raspberry ketone is the primary aroma compound of red raspberries. It is considered a safe and healthy supplement without side effects.

RASPBERRY KETONE SUPER FLUSH is very similar to our Raspberry Ketone Flush but with a more powerful flush for those with chronix problems with regularity. Our Raspberry Ketone Super Flush is an ideal solution for this condition. Plus, the amazing weight loss benefits pf Raspberry Ketones promoted on the Dr. Oz show will supercharge your metabolism helping you shed those unwanted pounds and inches quickly.

Raspberry ketone is a natural phenolic compound that is the primary aroma compound of red raspberries. It is used in perfumery, in cosmetics, and as a food additive to impart a fruity odor. It is one of the most expensive natural flavor components used in the food industry. The natural compound can cost as much as $20,000 per kg.[3] In 1965, the Food and Drug Administration placed raspberry ketone on generally recognized as safe (GRAS) status.

Rubus idaeus (Red Raspberry; occasionally as European Raspberry, Framboise, or simply Raspberry) is a red-fruited species of Rubus native to Europe and northern Asia and commonly cultivated in other temperate regions. A closely related plant in North America, sometimes regarded as the variety Rubus idaeus var. strigosus, is more commonly treated as a distinct species, Rubus strigosus (American Red Raspberry), as is done here. Red-fruited cultivated raspberries, even in North America, are generally Rubus idaeus or horticultural derivatives of hybrids of R. idaeus and R. strigosus; these plants are all addressed in the present article.

Senna (from Arabic sanā), the sennas, is a large genus of flowering plants in the family Fabaceae, subfamily Caesalpinioideae. This diverse genus is native throughout the tropics, with a small number of species reaching into temperate regions. The number of species is usually estimated to be about 260, but some authors believe that there are as many as 350. The type species for the genus is Senna alexandrina. About 50 species of Senna are known in cultivation.

What are Raspberry Ketones?
Raspberry ketone is the primary aroma compound of red raspberries. It is considered a safe and healthy supplement without side effects.

Raspberry ketones are a potent fat burner. They increase adiponectin which is a hormone that increases metabolism. This thermogenic process heats up the fat cells helping to melt away excess fat and pounds. In turn, the fat within your cells gets broken up more effectively helping your body burn fat faster.

How much do I need to burn fat and to lose my belly fat?
You would need to eat about 90 pounds of raspberries to get these results. Even if you could eat that much raspberries, it would be counterproductive as all that sugar would just turn to fat anyway. Luckily you need as few as 100mg per day of the right raspberry ketone supplement to get your body burning fat the way you want it to. However, 400mgs per day in Raspberry Ketone Flush is sure to supercharge your results!

How fast will I start losing weight?
A guest on the Dr. Oz show reported that her clients began losing weight as quickly as 5 days after starting on Raspberry Ketones. Of course this varies as all of us a unique. The before and after pictures she showed were amazing! It is always sound advice to incorporate a healthy diet and exercise to any weight loss effort for a lasting and sustainable healthier body weight.