In the past, some MDs have proposed that statin drugs should be put into our water supplies and handed out to fast food customers. As if fluoridated water posing as a necessary mass medicine that turns out to be toxic isn’t enough.

One out of four Americans aged 55 or over are on a statin drug, most of whom are without cardiovascular and heart problems. Many are prescribed statins  solely for high cholesterol, even as the FDA finally got around to forcing some, not all, of their side effects on statin labels and ads.

Maybe Pfizer wasn’t content with their sales revenue of $140 billion while its patent on Lipitor was in effect. Now other pharmaceutical companies continue to rake in profits with their statin drug versions while MDs and cardiologists push them on ignorant middle-aged folks that think their doctors know best. Even many young people are now being scammed into taking a statin prescriptions due to an outdated attitude towards LDL vs. HDL levels.

Dr. Carolyn Dean, MD, ND, author of Death by Modern Medicine, and passionate promoter of magnesium supplementation, posted an abstract from a Japanese study that scientifically indicts statin drugs as perpetrators of bad heart health rather than the proclaimed solutions of heart health.

The ad below appeared in Canadian publications in 2002. A solid example of pro-statin propaganda

Pfizer must have spent many millions of dollars on just this one ad. The implication is clear, you will not die as long as your blood “cholesterol” is low and you had better take a statin for it if it isn’t. This was and is a lie. In primary prevention there is no evidence any life has been prolonged by a statin. The corollary implication is that as long as your cholesterol is low you can eat anything. No problem with eating those chocolate-coated ice cream bars and weighing 300 pounds. 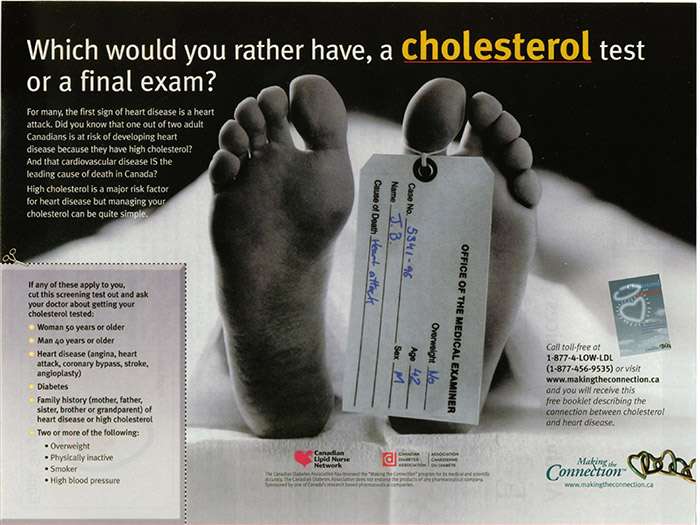 “Thus, the epidemic of heart failure and atherosclerosis that plagues the modern world may paradoxically be aggravated by the pervasive use of statin drugs. We propose that current statin treatment guidelines be critically reevaluated.”

So, this necessary supporting coenzyme for good heart and cardiovascular health is depleted by statin drugs. Not a good start, eh? The abstract goes on to mention how vitamin K2 is inhibited. It’s now known that K2-7 or MK-7 supplements and foods rich in K2-7  like natto are needed to ensure calcium doesn’t calcify (literally) in arteries and within heart chambers. Instead, K2-7 along with magnesium ensures the calcium gets into bones and teeth.

The calcification of calcium in arteries leads to the inflammation that cholesterol tries to patch up. Thus cholesterol takes the blame for blocked arteries as it forms “band-aides” on calcium buildups that inflame arteries.

The emphasis on beefing up on calcium supplements has led to worsening heart health. Vitamin K2 helps usher calcium from the blood and into bones where it should be. Both magnesium and silica are minerals that assist this process as well, another reason Dr. Dean promotes magnesium.

The Japanese study also isolates how statins impair biosynthesis of selenium proteins such as glutathione, which serves to prevent lipid peroxidation, a process that injures membranes of cells made of (gasp) fat!

A 2013 study in Ireland, “The Ugly Side of Statins. Systemic Appraisal of the Un-known Unknowns” concluded with a fighting Irish blunt hammer blow: “These finding[s] on statin major adverse effects had been under-reported and the way in which they withheld from the public, and even concealed, is a scientific farce.”

That 2013 study was completed before some medical scientists woke up to realize that our Alzheimer’s and other neurological disease epidemic is associated to the adverse effects of destroying the process of manufacturing cholesterol, an intended target of statin drugs.

A good bit of cholesterol is necessary for brain cell walls and nervous system meyelin sheathing, which both protects the central nervous system to promote good electrical neuron communication.

Dr. Dean has some basic suggestions for heart health. She recommends loading up on quality magnesium, considered the “master mineral”, as it is involved in over 300 cellular metabolic processes, many of which directly affect the heart. Dr. Dean offers online order high quality magnesium supplements.

With too little cholesterol the initial conversion of sunlight to vitamin D3 cannot take place nor can there be enough lipid support cell membranes and brain cell production. Low vitamin D levels are precursors to several disease states.

Paul Fassa is a contributing staff writer for REALfarmacy.com. His pet peeves are the Medical Mafia’s control over health and the food industry and government regulatory agencies’ corruption. Paul’s valiant contributions to the health movement and global paradigm shift are world renowned. Visit his blog by following this link and follow him on Twitter here.